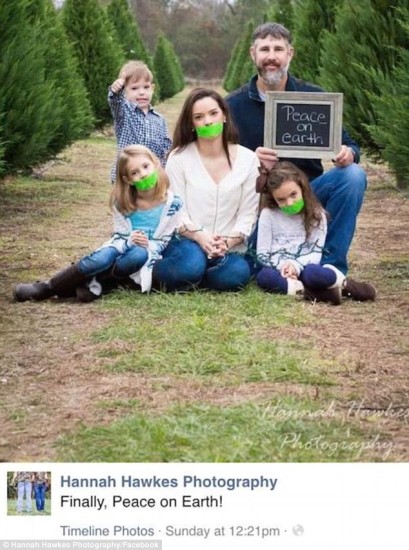 A ‘sexist’ holiday picture of a mother and her daughters posing with their mouths covered with tape and their hands bound by Christmas lights, while the father holds a sign that says ‘Peace on Earth’ as his son gives the camera a thumbs up, raise eyebrows.

A Louisiana family get SLAMMED for this supposed comical holiday card. taking by Hannah Hawkes, a Photographer at a studio based in Rosepine, Louisiana. She shared the controversial image on Facebook which has obviously gone viral as pictures send a thousand massage.

In this picture, a mother and her two daughters are seen with their arms bound and their mouths covered with green tape while the father of the family holds up a sign that says ‘Peace on Earth’ while his young son gives the camera a thumbs up.

The photo has since been removed from Facebook after thousands commented on how it perpetuates violence against women. “What were they thinking in the first place?  we get it, women can destroy the world by word of mouth, but hey! its meant to be that way for a reason.

Such portrait might come across as fun and funny to this family, but not to everyone who take a look, while some few women will laugh it out, majority will take it seriously.

Me on Social Media